WASHINGTON — Amazon has yet to break ground in Northern Virginia for its second headquarters, but residents are already turning away persistent speculators, recalculating budgets for down payments on homes and fighting rent increases.

Amazon announced in November that its second headquarters would be in National Landing, which includes parts of Crystal City, Pentagon City and Alexandria, all suburbs of Washington. The company will hire 25,000 people over the next 10 to 12 years.

“That day in November, I got more Zillow calls, inquiries and leads off of Zillow than I did the entire month of October,” said Michelle Doherty, a real estate agent who focuses on South Arlington, an area that is expected to change a lot.

As of June, the median home price in Arlington County was on track to spike 17.2 percent by the end of 2019, according to a report by the Northern Virginia Association of Realtors and the George Mason University Center for Regional Analysis.

Speculators have begun asking homeowners to sell. Potential home buyers, typically younger, are holding off buying to save more money for down payments. Low-income renters are worried about rising rents and about how they will afford basic necessities.

And Amazon has not even fully arrived yet. The company plans to hire 400 employees for the headquarters by the end of the year, and 1,000 to 1,500 employees in subsequent years.

James Younger, a homeowner in South Arlington for over 30 years, received inquiries from speculators once or twice a year before the Amazon HQ2 announcement. Now, he gets inquiries at least twice a month.

“I’m certainly not going to sell it,” Mr. Younger said.

Some real estate brokers have gone beyond mailers. Agents hosted a wine and cheese event, with massages, in the community room in Erica Le Blanc’s town home building in Crystal City.

“Whether or not the rent increases the people have experienced recently are the result of Amazon, or just the normal demand in the housing market, we don’t know yet,” said Christian Dorsey, the chairman of the Arlington County board.CreditJared Soares for The New York Times 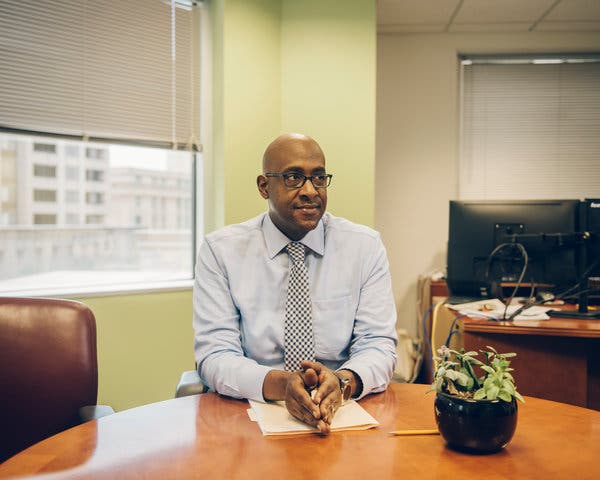 “Amazon is just speeding up the development timeline,” said Ms. Le Blanc, who expects to see more restaurants in her neighborhood because of Amazon.

Christian Dorsey, the chairman of the Arlington County Board, was careful to note that he did not believe Amazon was directly responsible for the spike in home prices and cautioned that rent increases were typical for the area. “Whether or not the rent increases the people have experienced recently are the result of Amazon, or just the normal demand in the housing market, we don’t know yet,” he said.

But low-income residents in Northern Virginia are worried. Amazon first began in Seattle in 1994, and since then, highly-paid workers moving into the region to work at the company have driven up home and rental costs in the area. Homelessness rates have skyrocketed.

Arlington is already one of the most expensive places to live in Northern Virginia, largely because of its proximity to Washington, and many residents fear that it could now go the way of Seattle. “The fact that we’re going to have 25,000 more jobs in Arlington is just likely to make it even more difficult for someone who doesn’t have a large income to live in Arlington,” said Christine Richardson, a board member of the Northern Virginia Association of Realtors.

Gloria, a housekeeper who has lived in Arlandria, a neighborhood in Alexandria, for over 13 years has already seen rent increases. The increases have made it harder for her to afford basic needs like food, clothes and shoes for her daughters, who are in the sixth and seventh grades, and herself.

“Before in the past, every time the rent were to increase, it would only increase around $15 monthly,” said Gloria, who asked that her last name not be used for fear of retaliation from her building’s management company. “But now they increased it up to $75.” She thinks the Amazon announcement prompted the increases.

Gloria has been working with Ingris Moran, the lead organizer for Tenants and Workers United, a labor union in Arlandria that works with low-income immigrant communities, to stop her building’s management company from again raising the rent during this lease period.

Ms. Moran said she was nervous about such increases. She grew up in Arlandria and lives with her husband and her parents in a one-bedroom apartment that has a den. The rent, including utilities, can reach up to $1,700 a month.

Benedetta Kissel, a homeowner in South Arlington, said her son lived in Maryland because the prices of homes in South Arlington were too high. “Many people’s children can’t afford to live in their hometown due to high rents and home prices,” she said. “Amazon will only make this worse.”

Arlington County will hold a public meeting on Wednesday on Amazon’s first phase of construction.

Virginia, Alexandria and Arlington County have all increased theirhousing budgets for 2020, in part because of the Amazon announcement.

The Virginia General Assembly approved $9 million annually for the Virginia Housing Trust Fund, which is an extra $3.5 million in funding. Arlington County budgeted $16 million for the Affordable Housing Investment Fund and $9.3 million for Housing Grants, a rental subsidy program. That is roughly $1 million in additional funding for both the Affordable Housing Investment and Housing Grants.

Mr. Dorsey said the $1 million in additional funding would primarily go toward maintaining existing efforts. “With Amazon coming, we have new efforts that are being supported by $15 million annually from the Commonwealth of Virginia, from the state, for the next five years to deal with housing impacts from Amazon and associated investment,” he said.

But housing and community advocates said that was not enough, especially because of the incentives Amazon received: $23 millionfrom Arlington County and $750 million from the state of Virginia.

“I don’t think we as a community and leaders did enough upfront to focus on affordable housing with Amazon,” said Julius D. Spain Sr., the president of the Arlington chapter of the NAACP. “How are our families who are earning $20,000 to $60,000 a year going to sustain and afford to live in a place such as Arlington?”

Amazon counters that its second headquarters will not have the same effect in the Washington region as its first headquarters had in Seattle.

“One of the things that drew us to this location was the plans the county and the commonwealth have in place to address this issue,” said Brian Huseman, a vice president for public policy at Amazon. “We also plan to grow gradually and hire people who live here to help reduce the impact on the region.”

The company already has plans to address housing issues in the region. Its development partner, JBG Smith, is the principal sponsor of the Washington Housing Initiative, which aims to produce affordable work force housing. Amazon announced in June that it would donate $3 million to the Arlington Community Foundation, a nonprofit organization that addresses affordable housing and homelessness in the region. The company also plans to match its employees’ contributions to several organizations that focus on housing, up to $5 million.

“That’s great that they did that,” said Alice Hogan, a member of the Arlington County Housing Commission. “But that is like a penny in their world, a tenth of a penny.”