University campuses are proliferating in Northern Virginia to meet demand for tech talent.

Growing up in Loudoun County, Shreya Bhatia was sure she wanted to be a cardiologist like the doctors who fixed the hole in her heart after she was born. But her thinking shifted during a follow-up ultrasound appointment while she was in high school. She noticed the machine used lots of calculus—a subject she loved—and plunged into computer science instead.

As a college student at George Mason University in Fairfax, Bhatia mentored a team of high school girls who went on to win a national tech competition with an application that assists kids with speech problems. She also built a registry that connects adoptees with their birth parents. She realized how computer science could be applied in a zillion different ways to help people.

Now 23, she’s still a Mason student—about halfway through her master’s degree in computer science, with a concentration in machine learning—but she’s also gainfully employed. Amazon snapped her up after she finished her bachelor’s degree and completed an internship with Amazon Web Services (AWS) in Herndon in the summer of 2019. As a software development engineer, she writes code and works on improving cloud services for everything from streaming services and dating apps to vaccine trials.

“My job is interesting and super impactful,” says the Ashburn resident, one of the first 1,600 employees hired at Amazon’s HQ2 in Arlington. “To see these customers who every day rely on us…I have a job that really does make a difference in people’s lives.”

With the arrival of Amazon and a proliferation of other tech companies in fields ranging from big data to cybersecurity, candidates like Bhatia are in high demand. The problem is, there aren’t enough to go around.

Universities are trying to change that, and in the process, sparking an academic explosion in and around Arlington. Some of the changes in the higher-ed landscape are physical. Virginia Tech, Mason and the University of Maryland are preparing to open gleaming new facilities here to take advantage of the cash, cachet and connections Amazon has brought to the area. 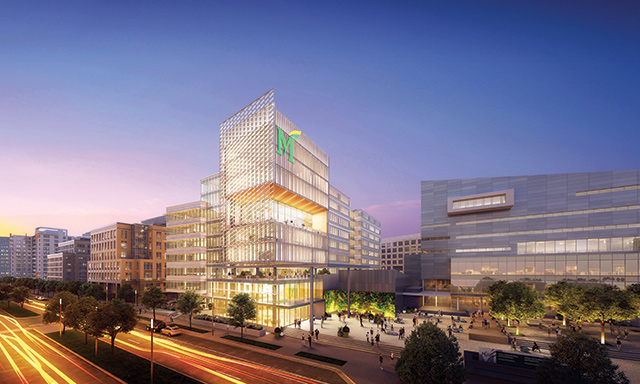 Other shifts in the college ecosystem are more philosophical, as incumbent institutions like Northern Virginia Community College (NOVA) rethink the anatomy of their degree programs to meet the growing demand for qualified tech workers.

Marymount University was ahead of the game in 2017 when it replaced its aging “Blue Goose” building in Ballston (so named for its blue metal windows) with a LEED Gold-certified tower that today houses its business school and the graduate programs of its School of Technology and Innovation, including a state-of-the-art cybersecurity lab. (A sister tower, The Rixey, contains student and faculty housing and retail.) Now the university is kicking off a virtual undergraduate program in data science, Java engineering and UX/UI (user experience and user interface design) in partnership with Netflix and the ed-tech company 2U.

Though Arlington’s evolution from “government town” to technology nexus has been underway for some time, Amazon’s influence is profound. In courting the tech giant to come east, the state of Virginia promised to double its output of B.S. and M.S. graduates in computer science, churning out an additional 25,000 over the next 20 years. That target has since risen to 32,000.

Amazon is clearly a catalyst in Northern Virginia’s college boom, but the equation goes both ways. Higher education was the secret weapon officials used to lure Amazon and its $2.5 billion campus to the area as 238 communities nationwide vied for the honor of hosting the tech superpower’s HQ2.

Stephen Moret was about a year into his job as president and CEO of the Richmond-based Virginia Economic Development Partnership (VEDP) when the Amazon deal opened for bids in 2018. Intent on bringing more technology companies to the Commonwealth, he realized he could attract and grow more of them by solving the industry’s biggest headache—finding qualified workers.

Sizing up the competition for HQ2, Moret knew Virginia would never win a bidding war against jurisdictions that were prepared to offer $5 billion or more in cash incentives. Virginia, with its history of fiscal conservatism, “was not a state that provided large incentive packages to companies,” he says. State officials also worried about alienating other businesses that had already relocated to the Commonwealth without receiving loads of cash.

But what Virginia could offer was talent. Moret scoured the LinkedIn profiles of Amazon employees at its Seattle headquarters to analyze the company’s hiring patterns. He could see that HQ2, wherever it landed, would need computer science graduates—thousands of them.

Fortunately, he had already started laying the groundwork in 2017 to meet that need. He envisioned a concept similar to Cornell Tech, a satellite campus of the Ivy League university in New York City that feeds into the city’s recruitment pipeline with graduate programs in engineering and technology.

Floating an idea to build a similar tech campus in Northern Virginia, Moret discovered that Virginia Tech was not only enthusiastic, but already dreaming of beefing up its presence just outside of D.C.

That presence is now unfolding in Alexandria, where Virginia Tech is building its $1 billion Innovation Campus at Potomac Yard, just down the street from HQ2. Slated to open its first building in 2024, the campus will eventually host nearly 1,000 master’s and doctoral students earning advanced degrees in disciplines ranging from artificial intelligence to next-generation wireless.

Some of the funding for the new campus comes by way of the Commonwealth’s Tech Talent Investment Program—a $2 billion talent pipeline involving multiple public universities and fueled by state and corporate investments that became the centerpiece of Northern Virginia’s Amazon bid. Moret says it’s the largest such investment in history, anywhere. “And now we had a way to benefit not just Amazon,” he says, “but every tech company in Virginia.”

Brian Stout, a member of Amazon’s public policy team, says the state’s twin commitments to tech education and workplace diversity were alluring not only to Amazon, “but also broadly benefit all industries through the region.” (Joining that effort, Amazon is now offering curriculum assistance to local schools and a summer program at HQ2 to train computer science teachers.)

“We came to Virginia because of the talent,” says Ardine Williams, who leads workforce development for HQ2. “We haven’t been disappointed.”

“I’ve never slept better after signing a big deal,” Moret says. “I believe we will look back at this, 15 years from now, and say this was an inflection point in Northern Virginia history when it became known as a tech hub. The biggest impact will not actually be HQ2 itself, but all of the investments in tech education.”