(CNN)It seems somewhat of an understatement to call the Tour de France a bike race.

It transcends cycling, shutting down every mountain pass, village, town and city it passes through, drawing huge crowds along the roadside like some kaleidoscopic carnival.
But — except for a brief period between 1984 and 1989 — women have been excluded from these festivities and, therefore, a place at the very pinnacle of the sport.
“The biggest race that most people have ever heard of … is the Tour de France,” pro cyclist Ayesha McGowan tells CNN Sport.
“And so whenever I tell people what I do … they would always ask, ‘Oh, like … you ride in the Tour de France?’ And I’d have to inform them that women didn’t currently have a Tour de France. But now I don’t have to do that anymore.”
On Sunday, the same day as the men’s race finished, the inaugural edition of the Tour de France Femmes began beside the Eiffel Tower in Paris as the women’s peloton set out on its own eight-day odyssey across France. 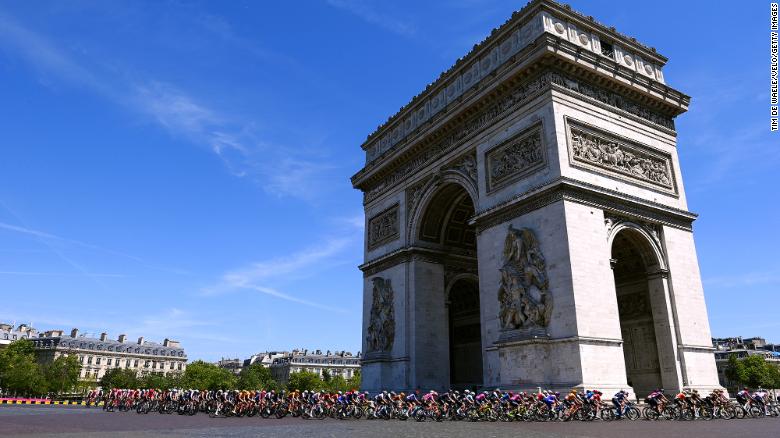 The Tour de France Femmes began in Paris on Sunday.
This week, it winds its way eastwards through the vineyards and gravel roads of Champagne, climbs mountains reaching altitudes of more than 1,000 meters, and finishes atop La Planche des Belles Filles — a wooded mountain with upper slopes rearing upwards at a frighteningly steep gradient of 24%.

The road to the Tour de France Femmes began in September 1955 when French sports journalist Jean Leulliot launched a five-day women’s race won by the Isle of Man’s Millie Robinson.
A sequel was not held until 1984 when it assumed a different form, this time stamped with the Tour de France’s official seal.
“In France, they didn’t think we would finish,” Marianne Martin, the eventual winner of the 1984 Tour de France Féminin, tells CNN Sport from the banks of the River Seine in Paris.
“That was the word on the street or that was the overall feeling. And of course, we all knew that we would.”
Six national teams, each comprised of six riders, started the race and Martin completed the 18-day, 1059-kilometer (658-mile) route the fastest — a feat for which she received $1,000 while Laurent Fignon — the winner of the men’s race that year — won over $225,000. 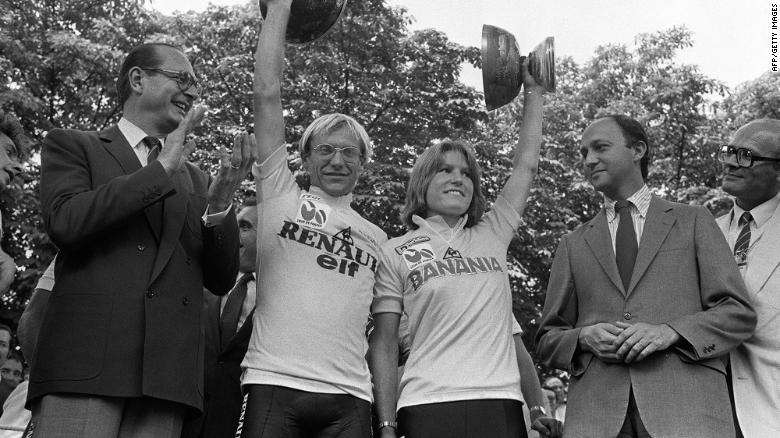 Marianne Martin stands on the podium in Paris with Laurent Fignon in 1984.
The Tour de France Féminin survived until 1989 when it was discontinued and replaced by an unofficial race that, in time, dwindled down to four stages and was eventually scrapped in 2009.
Four years later, professional cyclists Kathryn Bertine, Emma Pooley, Chrissie Wellington and Marianne Vos formed a pressure group to lobby race organizers ASO and distributed a petition that gathered almost 97,000 signatures, calling for a women’s race “running in conjunction with the men’s event … over the same distances, on the same days.”
Responding to this increasing pressure, ASO created La Course which began life as a one-day circuit race on the Champs Élysées, briefly became two stages long, and then returned to its original state as a one-day race.
An eight-stage Tour de France Femmes, organized by ASO, emerging from this fractured history is “a whole new start,” Martin says.
“It’s like a rebirth. It’s so needed.”

‘Showing the strength of women in cycling’

The reintroduction of a women’s Tour de France marks a seminal moment for gender equality in cycling.
“Women just traditionally did not have the access to resources or even the ability to do a lot of the things that men were able and allowed to do,” McGowan observes.
“There’s been a huge push to show the strength and the ability of women within cycling … cracking a lot of those myths about what women could and could not do.”
A lack of funding, live television coverage and prize money hindered the growth of women’s cycling for many years.
“I self-funded,” Martin recalls. “To get on the US team in America, you had to do certain races all around the country. And I decided I’ve got my body now, I’ll get my money later.
“I just grabbed my credit card. And honestly, I was very far in debt when I quit racing because there wasn’t the support that there is now.”
The financial cost of becoming a cyclist is beginning to alleviate for women due to the efforts of organizations like The Cyclists Alliance — the trade federation for female cyclists — and cyclists such as McGowan. 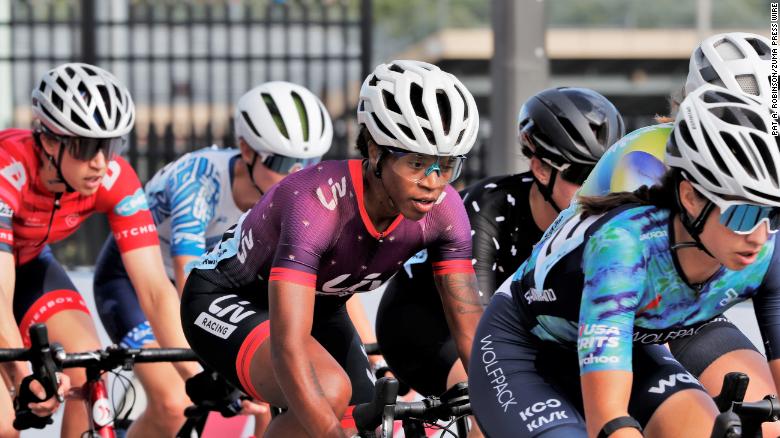 Ayesha McGowan rides for Women’s World Tour team Liv Racing Xstra.
McGowan — the first African American female professional cyclist — has established Thee Abundance Project to facilitate the participation of more women from ethnic minorities in cycling.
“For me, individually, my journey was never to just be the only person there. I want to be the first, but not the only,” she says.
Thee Abundance Project’s 2022 Micro Grant Program provides its recipients with entry fees, housing, transportation, a food stipend and other resources, enabling their participation in four major American road races.
“I feel like it’s super important for people to create those structures. And if you’re in a position to try to make space and opportunities for women to get into racing, or to even progress within racing, I think that’s a necessity,” says McGowan.
By gathering information and organizing the collective power of the professional peloton, meanwhile, The Cyclists Alliance has improved working conditions for these cyclists.
In 2020, 33% of the women’s peloton worked a second job while 43% reimbursed their own team for services like mechanical assistance, medical testing, or travel costs to races, according to a rider survey it distributed.
Cycling’s governing body, the UCI, mandated a year later that Women’s WorldTour (WWT) teams — the top tier of the sport — must increase their minimum salary from $15,251 in 2020 to $27,961 in 2022, rising to $32,638 in 2023. 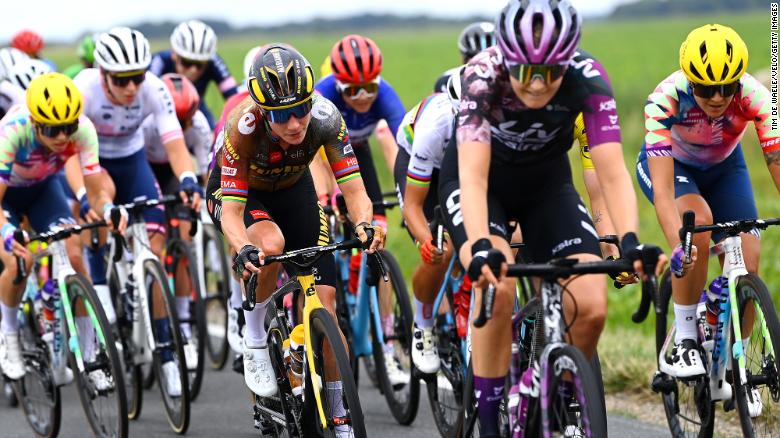 The women’s peloton racing in the Tour de France Femmes.
There is still much to be done, however, to reach equality.
Although the Tour de France Femmes is the richest race on the women’s calendar boasting €250,000 total prize money, it is a mere fraction of the men’s €2.2 million prize pot, while the financial insecurity deepens outside the biggest races and WWT teams.
Ten of the 24 teams participating in this year’s Tour are continental teams — the tier below WWT teams — and, as such, are unbound by the UCI’s minimum wage mandate.
Using data from its 2022 survey, The Cyclists Alliance told CNN Sport that only 10-15% of continental riders were paid the equivalent of a WWT minimum salary, while about 60% of non-WWT professional cyclists do not get paid at all.
CNN has reached out to the UCI for comment.

The profile afforded to women’s cycling by the very existence of a Tour de France Femmes can accelerate these efforts to improve gender equality.
“We didn’t have the financial support that we have now,” Martin says of her time in cycling.
“So you bring dedicated, enthusiastic sponsors in … that are going to stand behind it and financially and technically support the event, keep it going, keep the media involved and let people know about it [then] everybody wins.”
The race’s title sponsor Zwift — a virtual cycling training platform — has already signed a four-year deal, while another sponsor, exercise tracking app Strava, has launched a campaign called Strive for More which commits to supporting equity in professional sport. 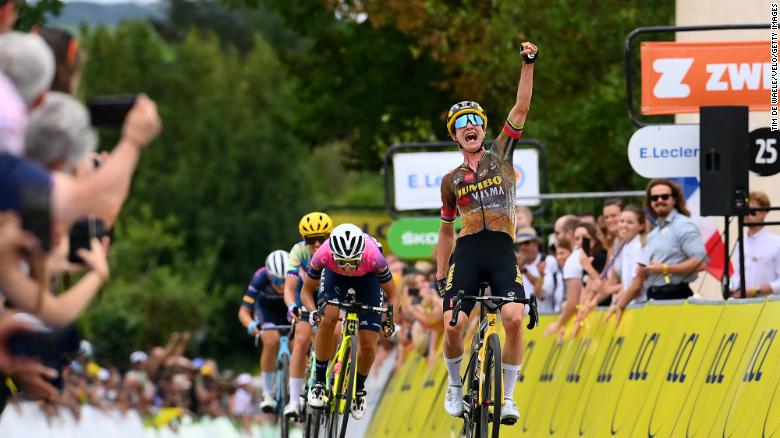 Marianne Vos won stage 2 of this year’s race, taking the famous yellow jersey worn by the race leader in the process.
One team, Le Col Wahoo, and its sponsors have partnered with one of the television providers GCN+ to give away 10,000 subscriptions so that fans can watch the race for free, raising the profile of the sport.
“The fact that [the Tour] is such a recognizable entity is going to do wonders because people from places that don’t even know about bike racing have heard of this race,” McGowan says.
So as the women embark on the Tour de France Femmes, it too is something that transcends cycling; every attack, every breakaway, every stage win is magnified in importance because it is not just any bike race — it is the Tour de France.
“It’s going to be an absolutely beautiful moment,” McGowan says of the event. “The women’s peloton is such a wonderful group.
“I have loved being a part of it myself, just the respect that everybody has for each other, knowing how much this means and how much this is going to impact the future of women’s sport.”
Source