Many consumers may not realize it, but they’re increasingly competing against institutional investors and contending with soaring building costs

Brian Evans thought his clients were going in with a strong offer.

Evans, a Redfin agent in the Washington, D.C., area, told Inman he was recently working with buyers who wanted a home that was listed for $850,000. Homes in the area have in the past sold for around 10 percent over their asking prices, so when his clients offered $150,000 over it seemed like they’d be strong contenders.

Instead, the home ultimately generated 14 offers and sold for a whopping $230,000 over its asking price. What had seemed like a strong offer had in the end only put Evans’ clients “in the middle of the pack.” They weren’t even close to winning.

A year into the coronavirus pandemic, “flattened” appears to be the operative word. Finally, infections and deaths are down, the curve is flattening and there’s hope that life and the economy are inching back to normal. But in real estate, a persistent lack of inventory that has been a long-running problem is now colliding with the spring buying market, amplifying a housing shortage to heights many agents have never before seen in their careers.

Case in point: “Inventory is as low as I’ve seen it for a spring market in the six years I’ve been practicing as a real estate agent,” Evans said. “This spring has really just blown things out of the water.”

Where exactly this inventory shortage is going is anybody’s guess, but according to economists and agents across the country it’s apparent that the problem is extremely widespread. And that means a multitude of consumers and industry pros are having their expectations flattened day-after-day by bidding wars, endless price increases and a deluge of offers on the few homes that do hit the market.

How bad is the problem?

For example, Redfin found in late March that 39 percent of homes during the prior four weeks sold above their listing prices. That was an all-time high, and was 15 percentage points higher than what was happening during the same period one year earlier.

The company further found that more than 60 percent of the offers that its own agents wrote in February faced bidding wars. This was high even compared to prior months during the coronavirus pandemic, when supply and demand have persistently been out of balance.

“Battles between buyers are more intense than ever,” the company concluded in a write-up of the findings. 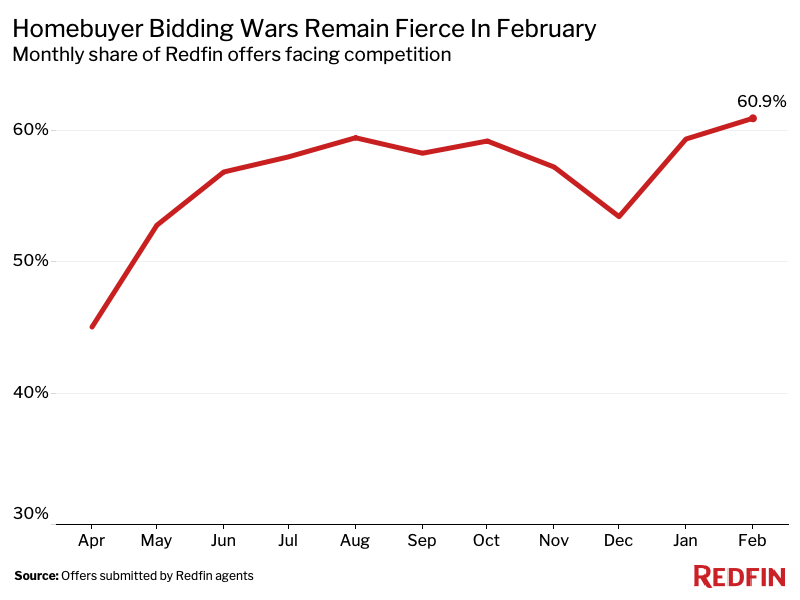 Redfin also found in late March that the pandemic has changed a host of buyer behaviors. Among other things, more buyers are now making larger down payments and waiving contingencies. Buyers are touring more homes. And the percent who are paying over a home’s asking price has jumped from 21.2 percent before the pandemic to 34.4 percent now. 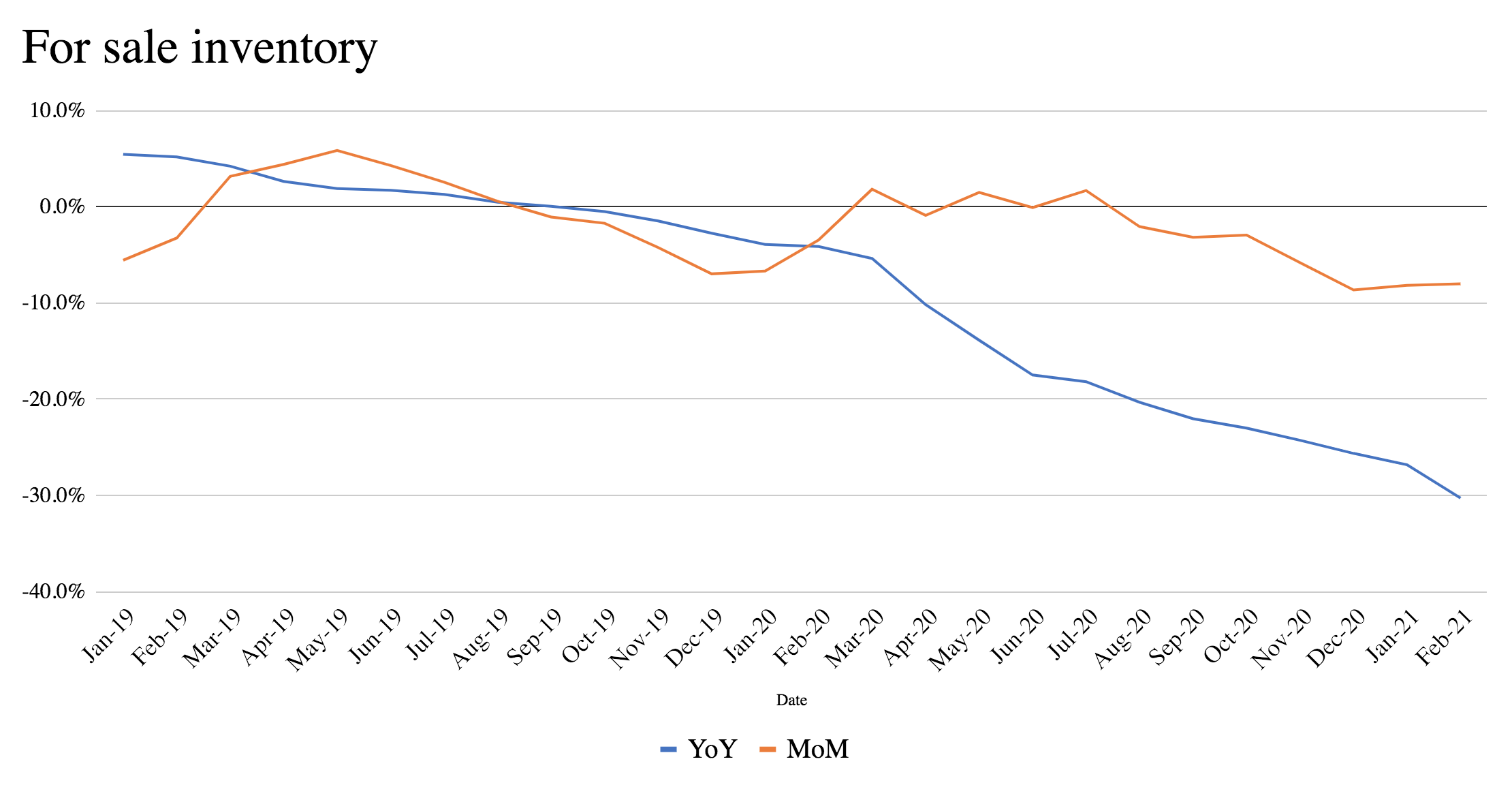 Zillow’s data similarly shows that the days it takes for a home to go under contract (“days to pending” in the graph below) has steadily declined — including precipitously since last summer. And that decline became even steeper in the fall, meaning competition has only become more fierce. 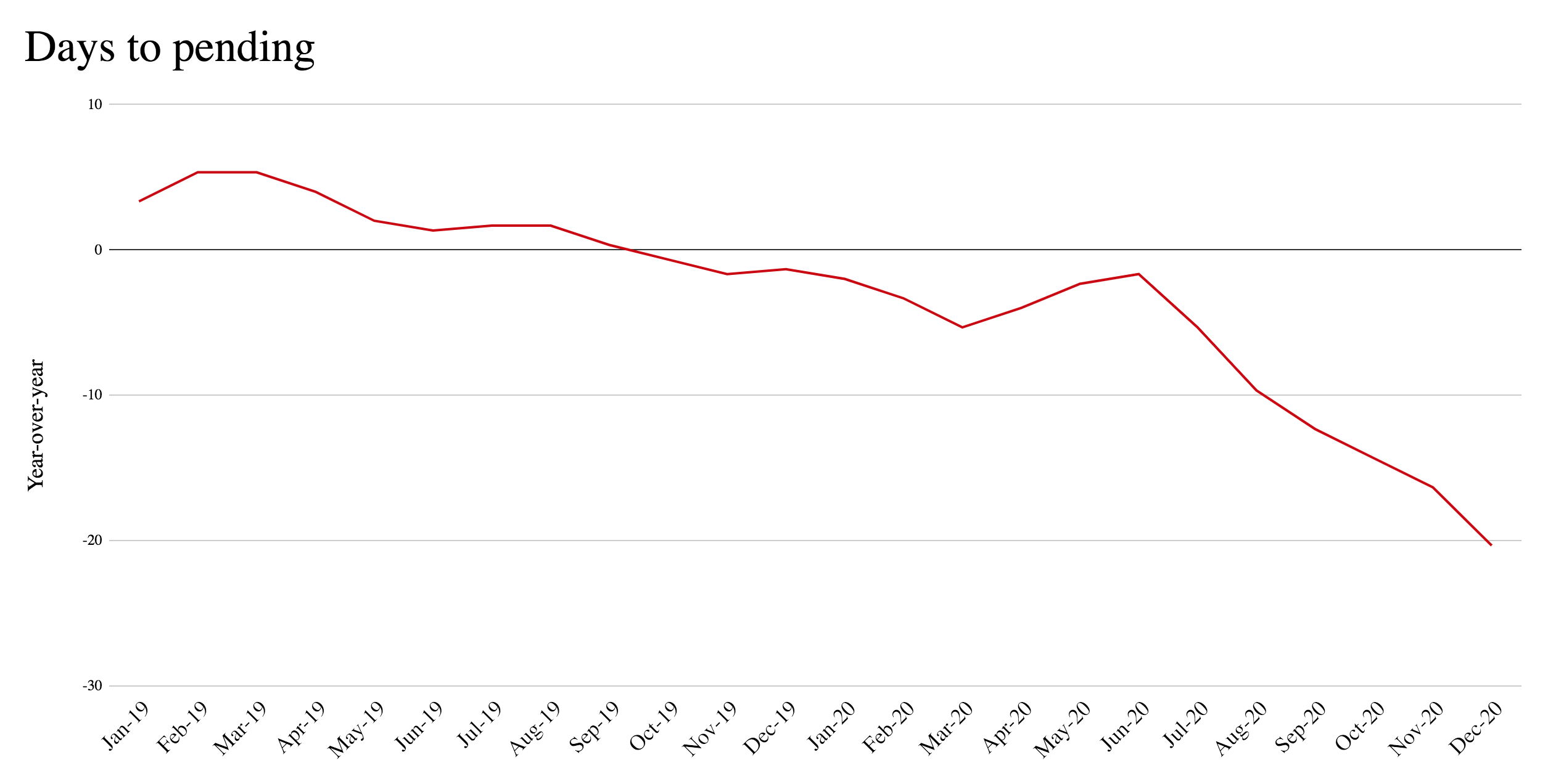 Zillow’s data shows inventory declines happened in almost every major U.S. metro area, though some are faring worse than others. At the top of the list is Raleigh, North Carolina, which saw for-sale listings fall more than 50 percent year-over-year in February.

A number of other cities saw reductions of near or above 40 percent: New Orleans; Riverside, California; Salt Lake City, Utah; Cleveland, Ohio; Providence, Rhode Island; and Jacksonville, Florida. Even Detroit saw a 36.8 percent year-over-year decline in inventory in February.

It’s difficult to generalize about the cities that are most impacted. Salt Lake and Raleigh, for example, are younger and tech-oriented. Providence likely benefits from its proximity to other major metro areas. Meanwhile Cleveland and Detroit lie in the Rust Belt and haven’t made many headlines for their hot real estate markets in recent years.

The only thing that’s really clear from all these many data points, then, is that the current inventory shortage is widespread. The whole country, in other words, has seemingly turned into San Francisco.

(Ironically, San Jose, the largest city in California’s Bay Area, is the only place in Zillow’s data set that saw year-over-year increases in inventory in February. That’s surely due to the continued ability of tech workers to operate remotely from their companies.)

Of course conditions vary by location, but the takeaway from all this is that the inventory shortage is severe, it is widespread and it is something different than what was going on pre-pandemic, when home prices also had been rising. As the curves on those graphs indicate, the supply shortage has been getting much worse just in the last few months.

Why is the problem so bad?

There are several big trends that have produced this inventory shortage. And the first long predates the pandemic.

Jeff Tucker, a senior economist for Zillow, told Inman that the roots of this current inventory shortage date back more than a decade, when housing construction mostly stopped in the wake of the housing bubble collapse.

“Ever since 2007, we were radically under-building,” Tucker explained, “especially single-family homes.”

Some of the reasons for that under-building are probably self-apparent: As the housing and lending markets collapsed, builders had a harder time financing projects and there was less demand for the product they were making.

But over time, other challenges emerged as well. Tucker explained that the construction industry depends in some areas on migrant and immigrant workers. However, as the sector dried up many of those workers returned to their home countries and never came back. Other workers also found jobs in different industries, such as energy. The result was a labor shortage that has continued to hamstring the construction industry right up until the present day.

“The housing crash was just so much worse for the homebuilding industry than any other industry,” Tucker said. “And a lot of that capacity for building homes went away. This is a lasting scar for this industry.”

The rising home prices of the last few years have incentivized builders to catch up, and Tucker said they are making some progress. But the supply of homes has been falling behind for so long now that catching up could take some time.

“They’re building very fast,” Tucker explained. “But I think it will take several years to meet this excess demand.”

Agents on the ground have witnessed the impact of this trend first hand. Tim Heyl — a team leader in Austin with Keller Williams and the founder of real estate startup Homeward — got started in the real estate industry in 2009, at the height of the housing-induced Great Recession. There were plenty of homes on the market at the time, but that also meant “builders were not building for years.”

“We need something like 1 million home starts a year across the country,” he said.

To make matters worse, this period of underproduction has also coincided with unprecedented demand.

Danielle Hale, chief economist at realtor.com, agreed that there has been a decade of under-building in the construction industry, and pointed to that problem as among the main drivers of soaring home costs. On top of that, Hale also explained millennials are the largest generation since the baby boomers and have been gradually hitting homebuying age in recent years. That trend is peaking right now.

“The largest chunk of the millennial generation is hitting 30,” Hale explained. “I think that’s one of the things that has really created this tipping point. You kind of have this perfect storm of factors coming together to really make the housing market unlike what we’ve seen in recent years.”

These are complex trends, but the takeaway here is that the current housing shortage has been brewing for a long time. That drove wild price growth for years in expensive markets like San Francisco and Los Angeles, but in recent months it has also spilled out into just about everywhere.

The building shortfall and demographic shift have both been brewing for a long time, but of course there’s something else going on right now as well: COVID-19.

Tucker described the pandemic as “a short-term component stacked on this long-term trend” of under-building. It’s a trend that has been observed throughout the pandemic, but Tucker said essentially what happened was after a brief pause in housing demand a year ago, interest in owner-occupied homes came “roaring back.”

Part of that had to do with people suddenly wanting more space in their homes, or wanting to escape pricey cities for more affordable regions. Extremely low interest rates also helped fuel demand.

And Tucker pointed to what economists have described as a “K-shaped” recovery, which is when different parts of the economy improve at different rates following a recession. In the case of the last year, Tucker noted that the pandemic has left some consumers uniquely well-positioned to buy real estate.

“A lot of office workers in the upper third of the income distribution were doing fine and had more disposable income than in a normal year,” he said, “and also had a need for space.”

Many such consumers have helped drive up housing costs, in part because fewer existing homeowners have been listing their houses.

“Usually the way market economies work is, if you don’t have enough of something, the price goes up and that incentivizes people to produce more,” Hale said. “In this case, it should incentivize homeowners to sell their home.”

Curiously, though, that hasn’t happened to the same extent that it did in the past. Hale said the issue may be that consumers fear they won’t be able to find new housing if they sell their existing homes. Other factors may include concerns about health and safety amid COVID-19 outbreaks, or simply that many people are satisfied with their current situation.

“It could just be that a lot of homeowners are happy where they are and they don’t need to move,” Hale said.

Either way, though, the pandemic has been a unique period for housing, during which time long-running supply issues collided with a rare and sometimes-baffling resistance among consumers to list their homes. The result has been escalating prices, bidding wars and a situation that few in the industry saw coming.

“I would say that this is definitely the first time we’ve seen properties sell as quickly as they have in our data history,” Hale concluded. “It’s pretty historic.”