Sotheby’s London is pleased to present our fourth sale dedicated to Britain’s most provocative artist. Banksy surveys the mysterious artist’s work, with a curated selection of sought-after prints that are sure to appeal to all Banksy enthusiasts, from the first-time buyer to the established collector. Online bidding will be open from March 9-18. 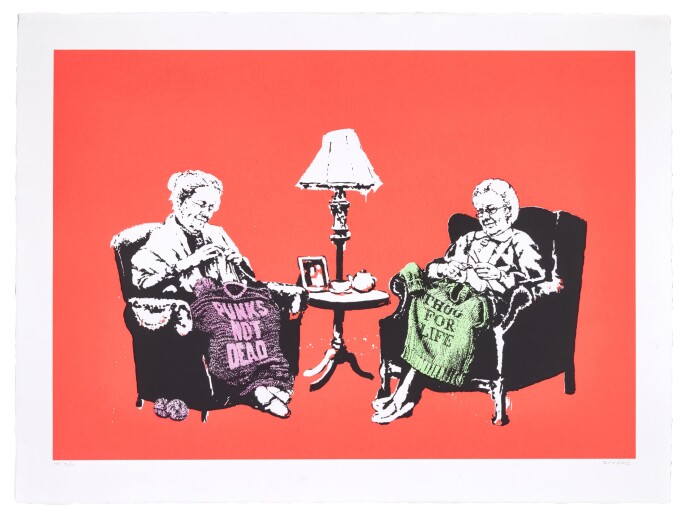 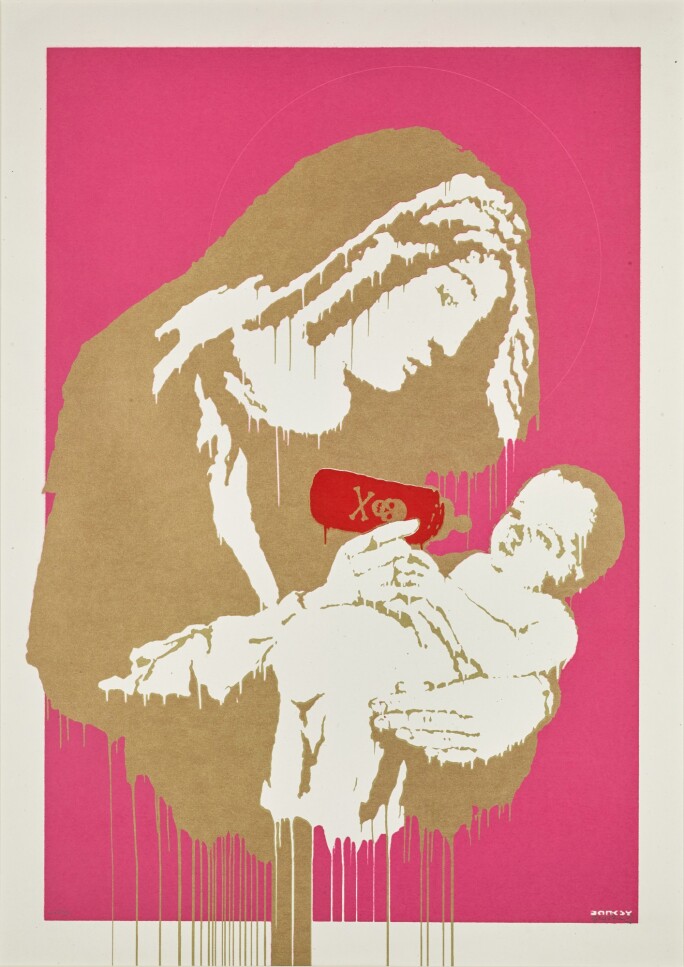 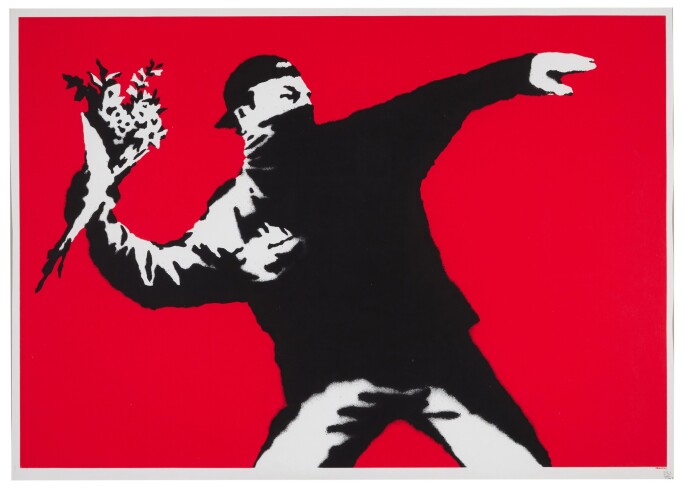 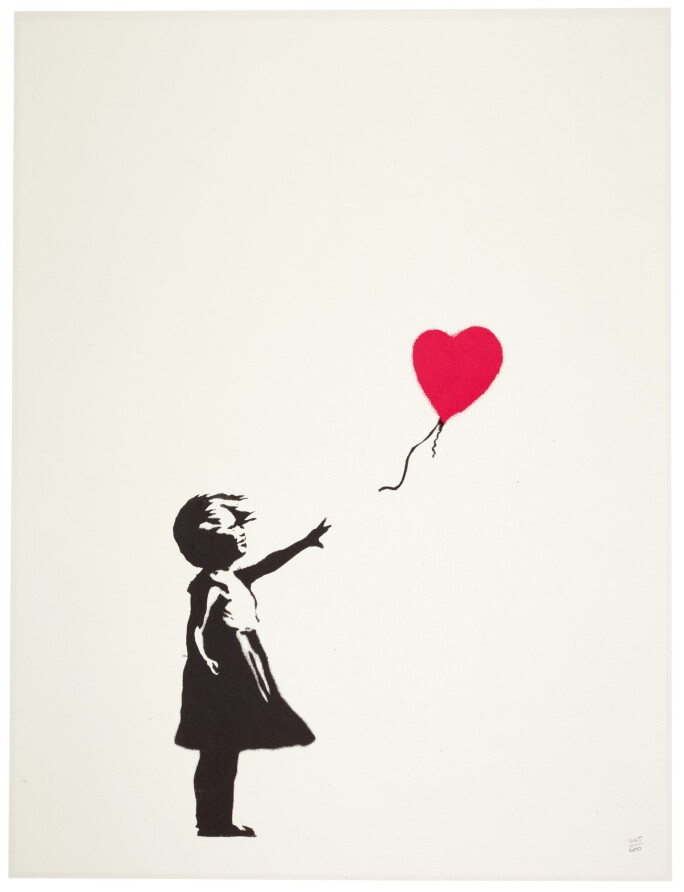 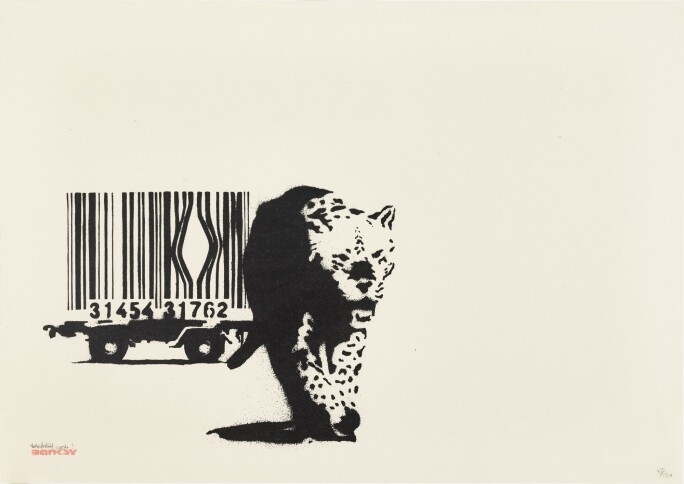 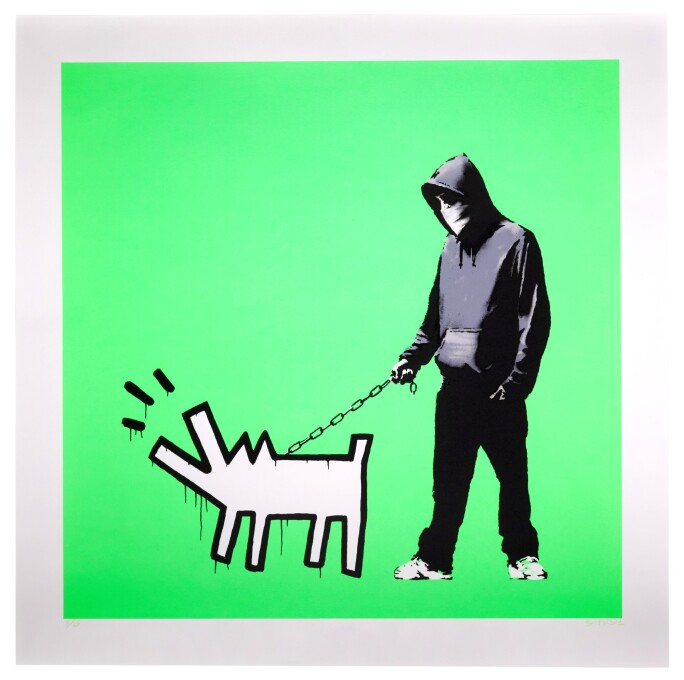 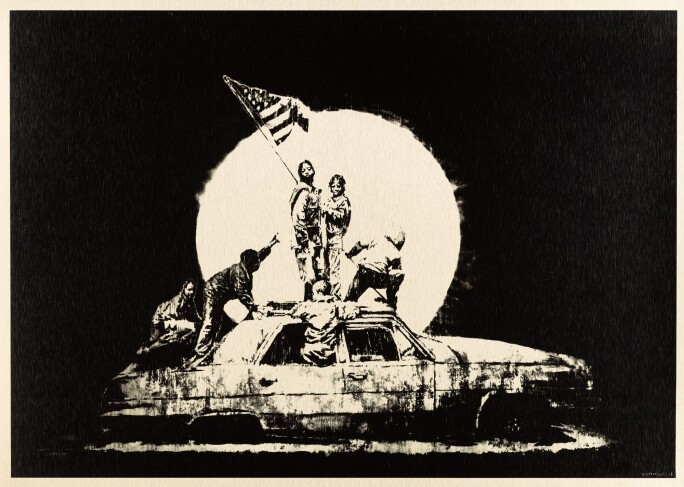 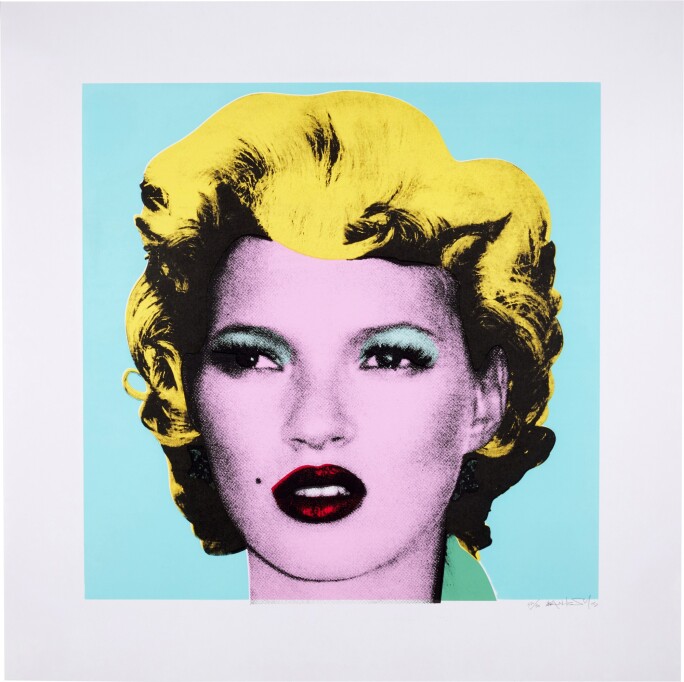 In the summer of 2003, in a disused warehouse in East London, Banksy’s first major solo show took place. Dubbed, ‘one of England’s best — and briefest — shows this season’, it was on for two days before the police shut it down.

The exhibition was highly controversial due to the inclusion of live painted animals, vandalized police vans and cars and numerous provocative artworks. When discussing the show – Banksy said, ‘I’m taking the idea of branding back to its original roots, which is cattle branding. I call it Brandalism’

Turf War was undoubtedly a pivotal moment in the artist’s career – it was here that he debuted the subjects that would later become some of his seminal works, including Toxic Mary, Laugh Now and Flying Copper. 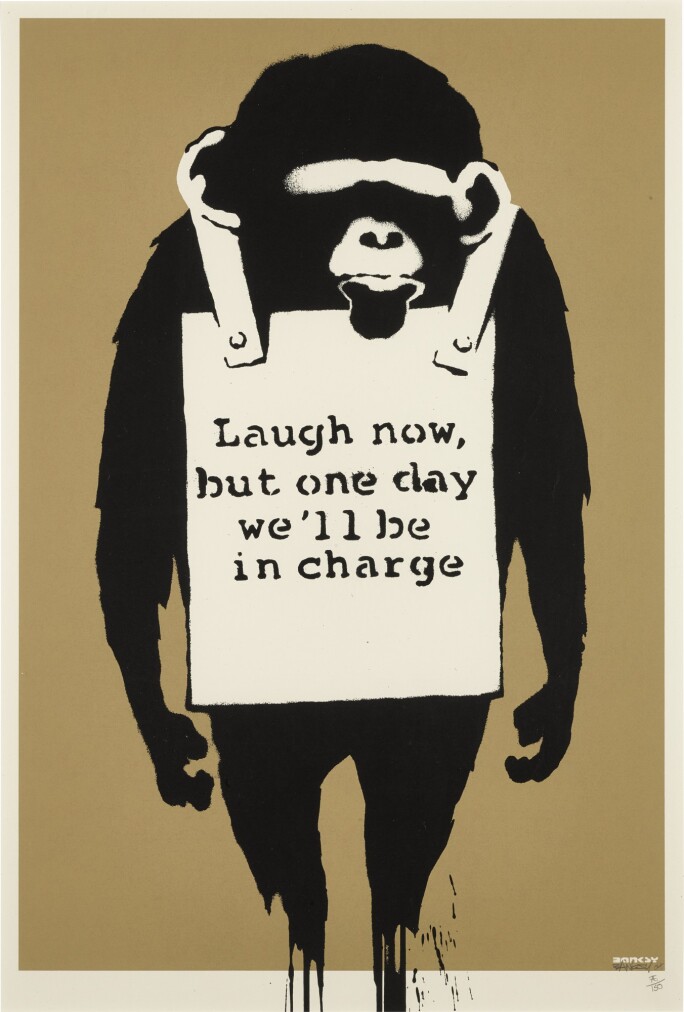 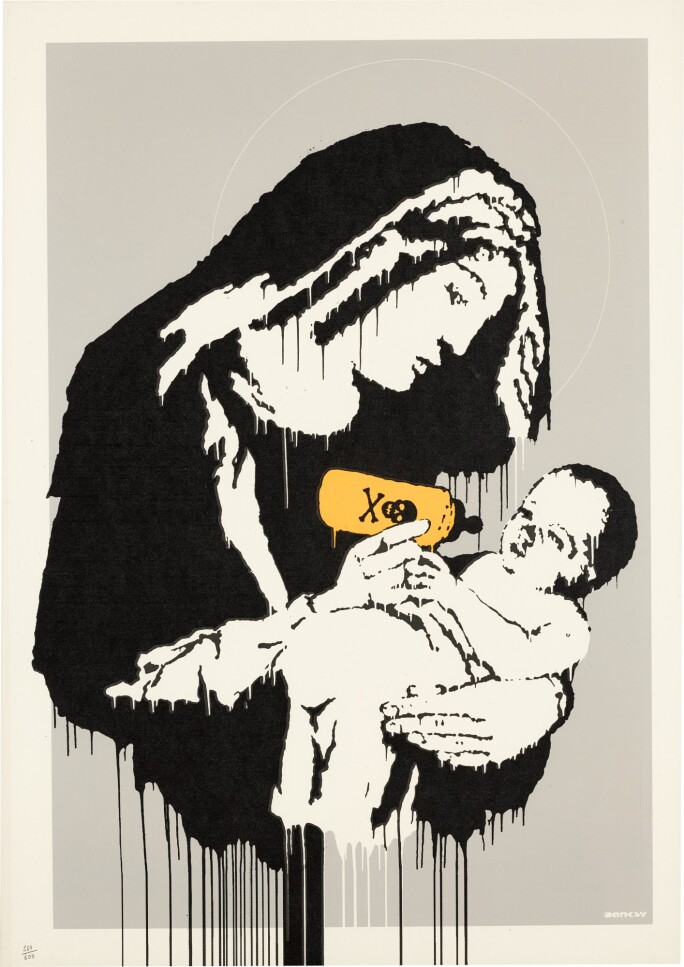 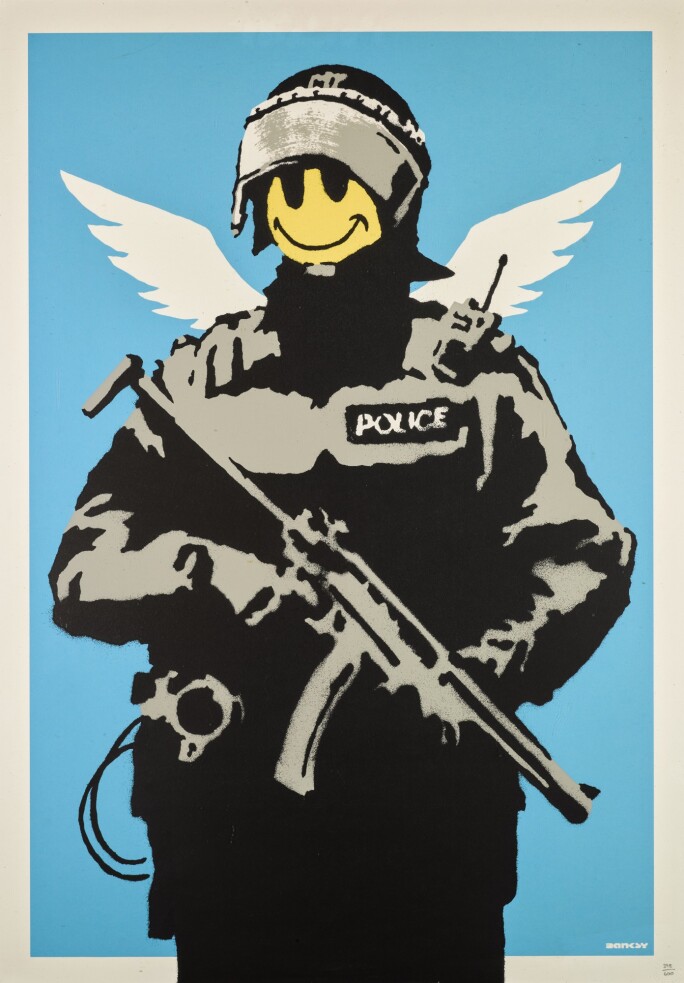 Walking into the Barely Legal exhibition, one would be greeted by Tai, a 37-year-old elephant, painted red and decorated with gold fleurs-de-lis to match the wallpaper. This was Banksy’s approach to the subject of poverty and social injustice, ‘There is an elephant in the room. Twenty billion people live below the poverty line’.

The exhibition took place in September 2006; it marked the artist’s first large-scale exhibition in the United States. For the occasion, Banksy created a set of six works that were baptised: Barely Legal Print Set. The group of screenprints, comprising Grannies, Sale Ends, Applause, Trolleys, Festival and Morons, revealed the artist’s social and political criticism and his mockery of consumerist society most particularly. 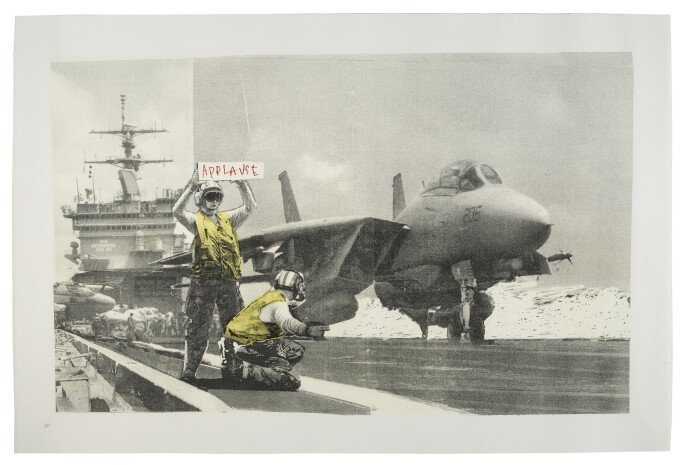 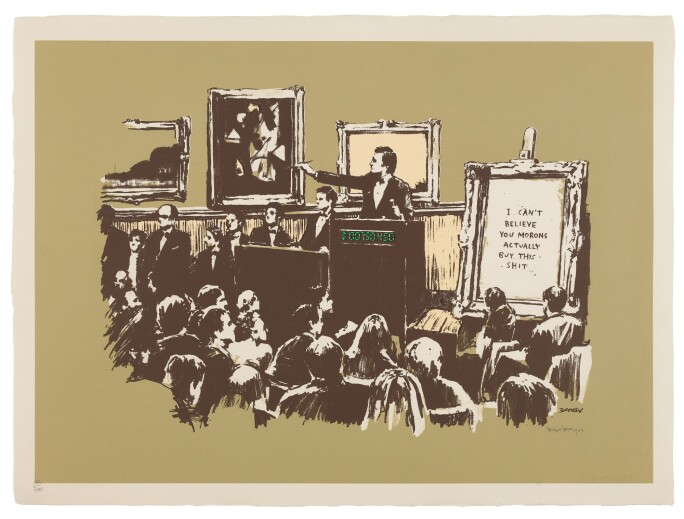 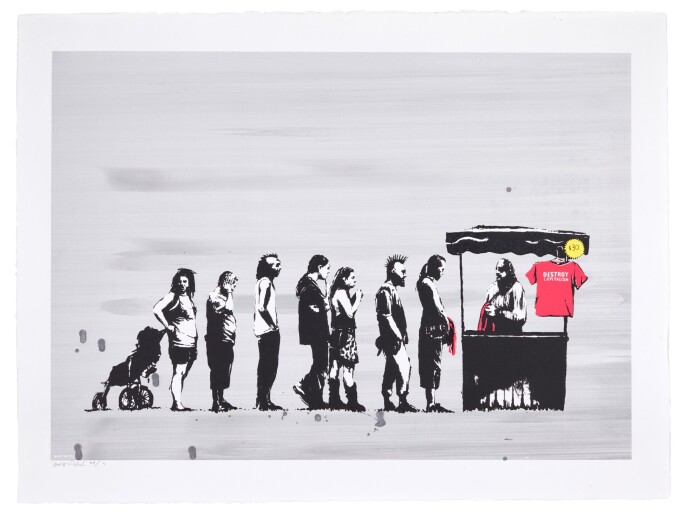 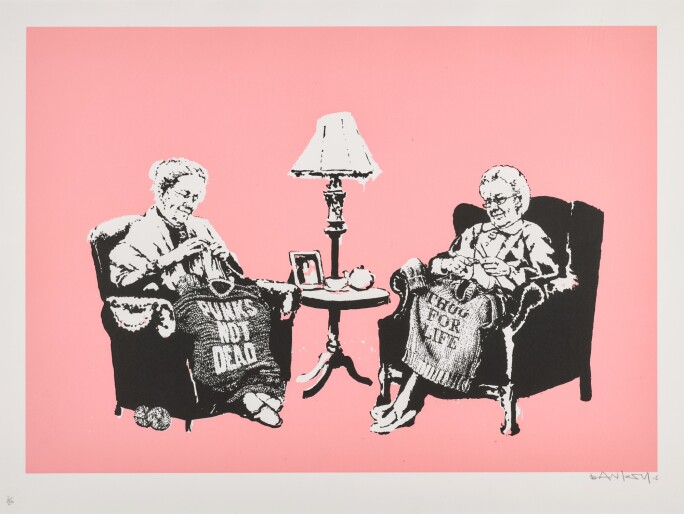 Described as a ‘squat art concept store’, Santa’s Ghetto is Banksy’s yearly Christmas pop-up exhibition. Since their first iteration in 2002, the shows have included works by other artists such as David Shrigley, Space Invader, Pure Evil and Jamie Hewlett.

Though the exhibitions were usually staged in various London locations such as Shoreditch, Oxford Street, and Carnaby Street, in 2007 Santa’s Ghetto famously took place in Bethlehem. During each of the exhibitions, Banksy published a number of new editions, such as Bomb Middle England, Happy Chopper, Grin Reaper, Jack and Jill and Flag. The latter was initially available in silver and gold and following its success was later released on Formica in smaller editions of 20 and 23 impressions respectively. 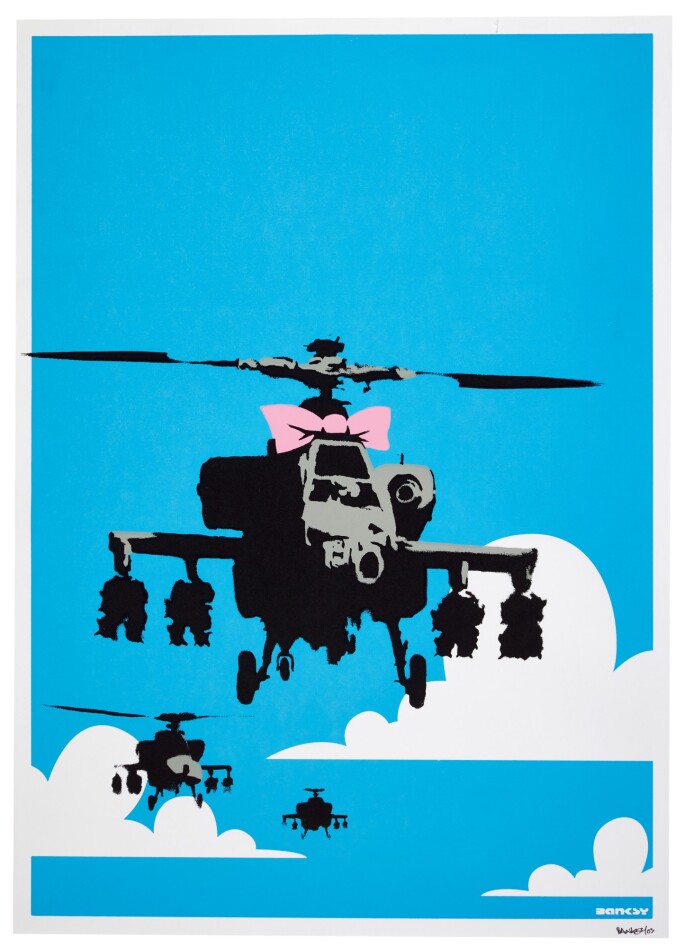 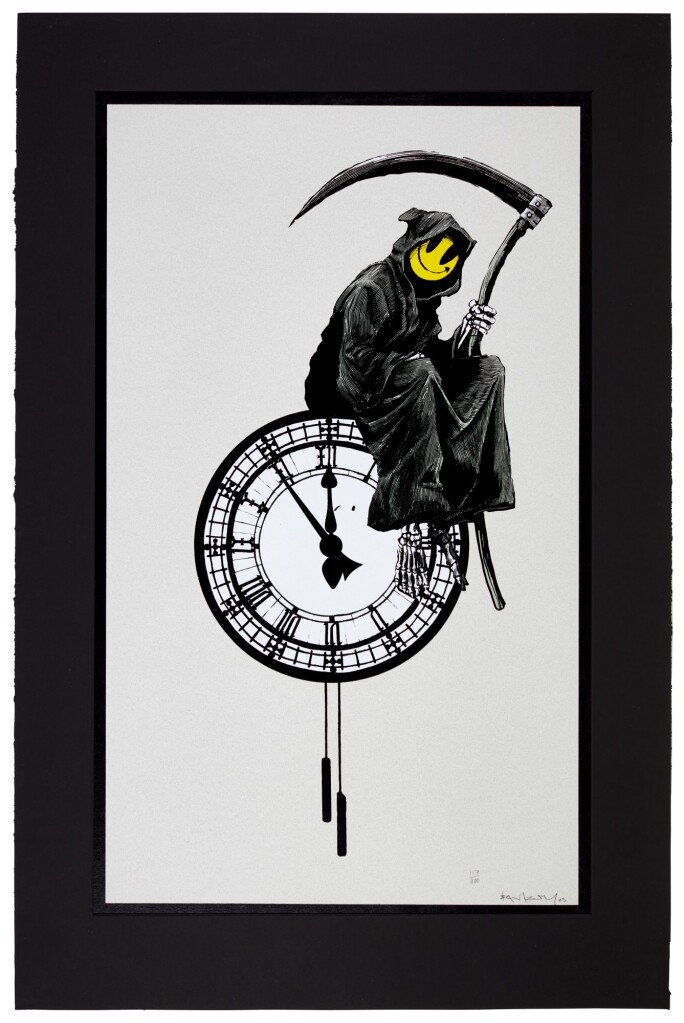 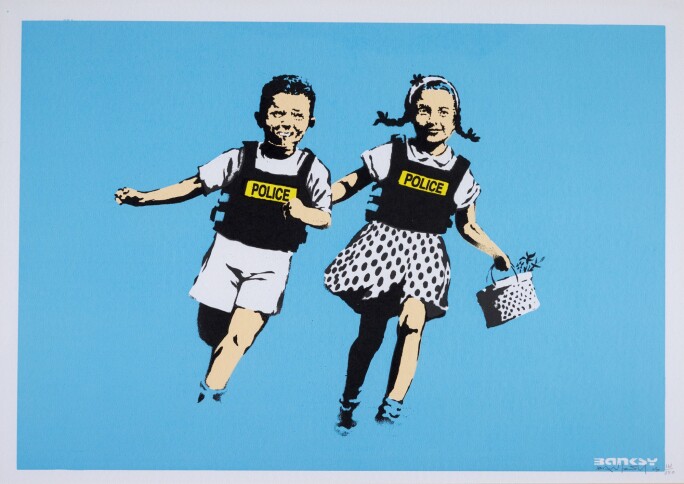 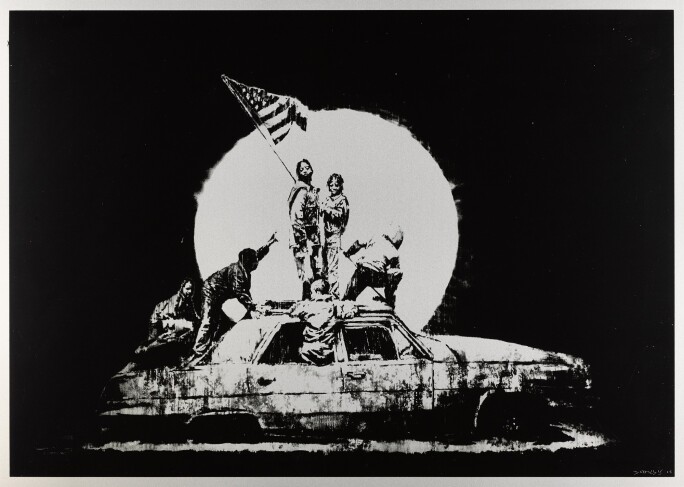 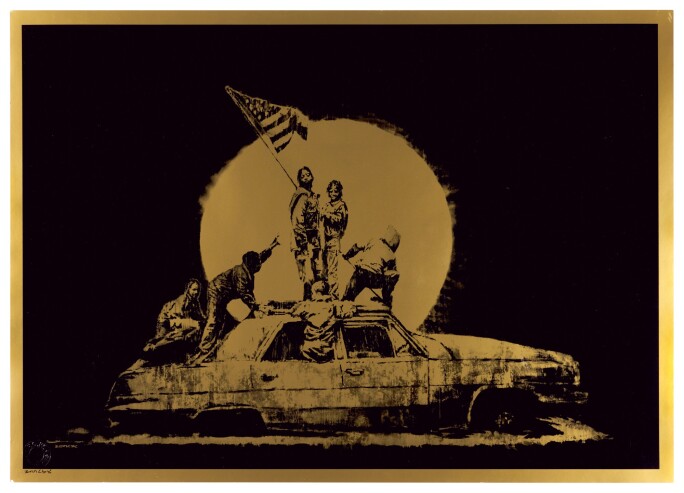 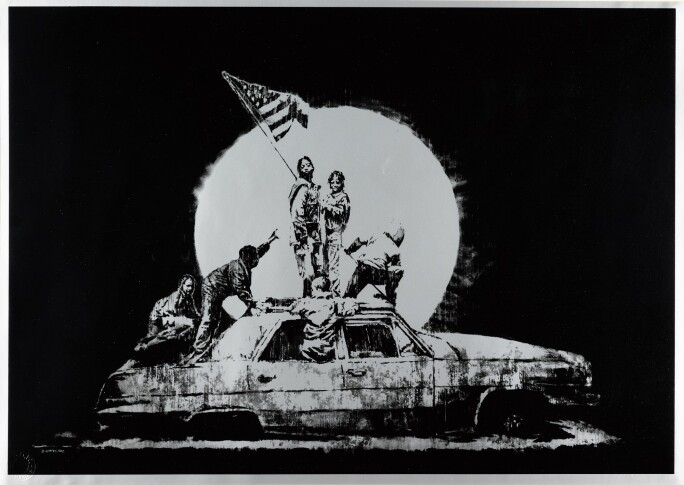 After he was nearly caught by the Transport Police while trying to paint the side of a train, Banksy realised he needed to cut his painting time in half – he subsequently discovered stencils.

Many of his most sought-after prints were first brought to life as murals – such as ‘Girl With Balloon’ or ‘Choose Your Weapon (Fluoro Green)’. On the wall they were deliberately set in dull surroundings to reinforce they’re meaning and reach.

A year later in Jerusalem, ‘Love is in the Air’ appeared shortly after the West Bank Wall was built. The work is based on imagery of college students protesting the Vietnam War.

‘Barcode’ is another important example of Banksy’s use of stencils. The image first appeared in 2004 on the side of a house on Pembroke Road in the artist’s hometown of Bristol. It has now become one of Banksy’s most desirable prints.