Virginia Tech is building its newest campus in the city of Alexandria, Virginia, just south of the planned location of Amazon’s site in Arlington.

Virginia Tech President Tim Sands made the announcement Monday morning in Alexandria, joined by officials including U.S. Sen. Mark Warner (D-Virginia), who hailed the $1 billion graduate campus as a leap forward for technology education in the Washington region. 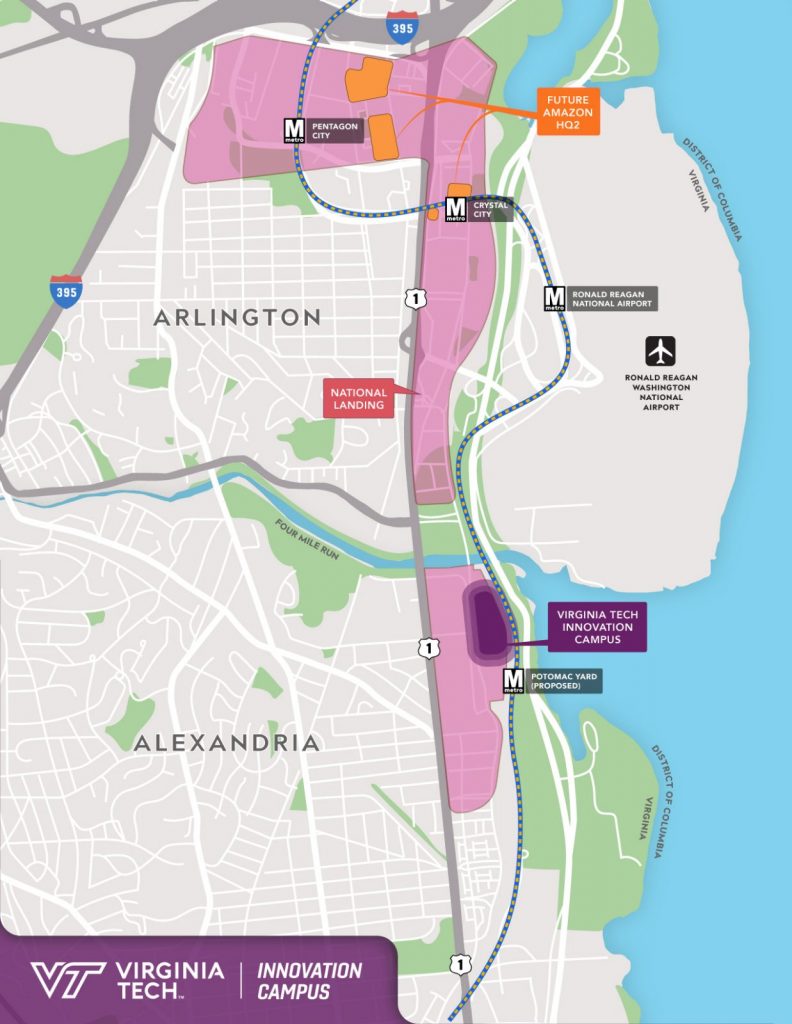 Virginia Tech’s “Innovation Campus” will be located near the forthcoming Potomac Yard Metro and the planned location of Amazon’s site in Arlington.Courtesy Virginia Tech

“We’ve got great, other educational institutions all around the national capital area, but we have not had the world-class research facility that the Innovation Campus will produce,” Warner said at a press conference.

The facility is expected to offer graduate-level courses in cybersecurity, quantum computing, artificial intelligence and other forward-looking technologies that have become growing focal points for regional employers, particularly government contractors. But observers also say Virginia Tech’s enhanced presence in the region could lure more product-focused tech companies, like those that dominate Silicon Valley.

Virginia plans to invest millions of dollars in the campus as part of the state’s approved $750 million incentives package for Amazon. The package included up to $375 million for master’s degrees in technology education, spread across both Virginia Tech’s Innovation Campus and George Mason University’s Arlington center. The investments are performance-based and require both institutions to raise matching funds.

Critics of the Amazon incentives package have called the new Virginia Tech outpost “Amazon University,” suggesting its existence is predicated upon feeding employees to the online retailer, which has committed to hiring as many as 38,000 employees through 2034. But supporters of Amazon have rejected that criticism, saying it will benefit a range of employers in the area, diversify the economy and slot more local tech graduates into local jobs.

Even if they graduate from D.C.-area universities, say tech industry observers, STEM graduates often leave the Washington area to take jobs on the west coast.

The Innovation Campus will sprawl across 1 million square feet as part of a 65-acre mixed-use development, helmed by JBG Smith and real estate investment firm Lionstone. The development plans include public open space and ground-floor retail, “knitting the campus into the fabric of Alexandria,” according to a press release from Virginia Tech.

The forthcoming Potomac Yard Metro — expected to open in 2022 — will be located nearby.

The first wave of graduate students is slated to enroll at the Innovation Campus in the fall of 2020, but they’ll initially inhabit existing space while the new facilities are being built. Construction is projected to be complete in 10 years, when an anticipated 750 master’s students and hundreds of doctoral candidates will be enrolled.

But plans for the development won’t be negotiated without community input, says Brandy Salmon, founding managing director of the Innovation Campus. A “months-long process” of working with city stakeholders, developers and Alexandria residents is expected to take place, involving a series of public meetings.

“We intend to be a great partner and that means soliciting input to make the right choices for Virginia Tech and the community,” Salmon said in a press release. “We aren’t just thinking 10 years down the road. We are building toward a 100-year vision.”