Among 18- to 25-year-olds, a 12% decline in individuals living on their own translates into a $726M slash in rent revenue, according to Zillow. That’s 1.4% of the US rental market

The coronavirus pandemic has created unprecedented uncertainty in the lives of many homeowners and renters. As a result, the response for an increasing number of adults and their families has been to seek comfort and security by moving back home.

Over 32 million adults were living with a parent or grandparent as of April 2020, up 9.7 percent from the same time the year before and the highest number on record, according to a recent Zillow analysis. Out of those adults living with a parent or grandparent at that time, about 2.7 million had moved to their new living situation during the months of March and April. 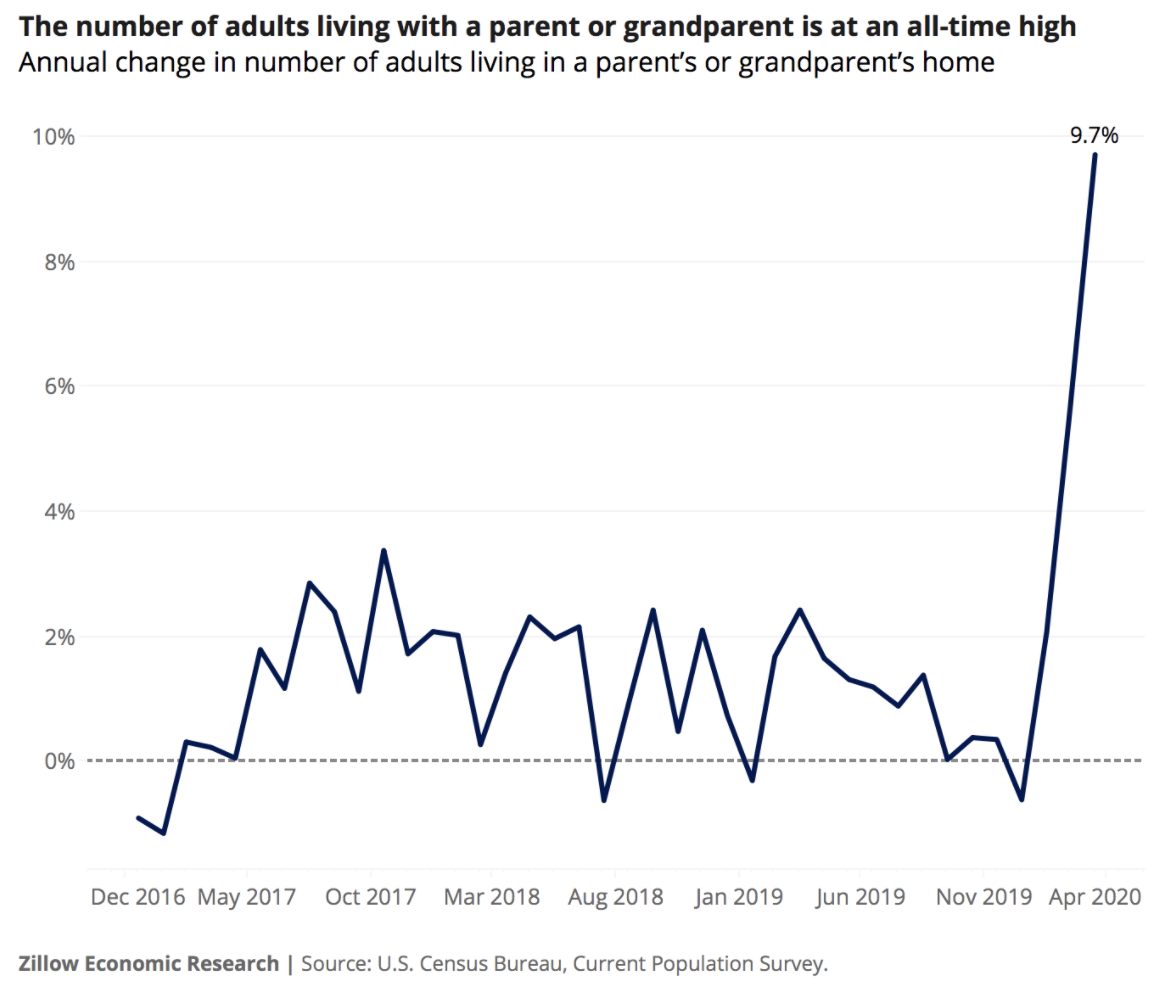 Such was the case with Leslie Zemnick, a 31-year-old startup advisor based in New York City.

Zemnick was living in Brooklyn with her partner when the pandemic hit. Her in-laws, who are foreign nationals and own an estate in the northern suburbs of Philadelphia, left for a business trip overseas before the pandemic peaked, and have been stuck sheltering-in-place in Denmark since that time because their departure flights keep getting cancelled.

In the meantime, Zemnick and her partner — as well as another sibling in the family, her significant other and their two-year-old — decided to move back to their parents’ estate at the beginning of April in order to get out of New York City, and help their parents by prepping their home for sale while they’re stuck abroad.

Meanwhile, the property is currently on the market, and listing agent Bobby West, Realtor at Coldwell Banker Squirrel Hill, has been conducting showings since Pennsylvania Governor Tom Wolf allowed the real estate industry to reopen in mid-May.

“[You] can’t make this stuff up,” West said of the family’s situation.

West said that potential buyers have been made aware that the house is currently occupied.

“We’ve been showing the house using CDC guidelines and just being meticulous about everything,” West said.

Once a final offer on the home is settled, Zemnick said everyone will return to their apartments in Brooklyn, which was always their intention.

“We were always going to go back,” Zemnick told Inman. “It was kind of our mission when we got here to help Bobby getting new photos to stage, getting the gardens up-to-date.”

Although others might be more hesitant to return to an area particularly hard hit by the virus, Zemnick expressed the resiliency of a true New Yorker.

“We love the city,” Zemnick said. “The four of us have experienced a couple different life events in New York City, personally and also globally, so to return to it is a welcome return.”

“This has almost been like a little vacation, though,” Zemnick added. “I can’t remember the last time I’ve seen the season change and so much wildlife. We witnessed the birth of a baby deer, called Game Control on a large black bear …”

Jenny (who preferred to not be identified by her last name), is a 36-year-old fitness instructor and personal trainer who had been living in Astoria, Queens, for 11 years with her husband and one-year-old child when the coronavirus outbreak began to spread. Mid-March, Jenny and her family decided to move back home with her in-laws for two weeks while waiting for things to settle down.

“As we realized this pandemic was much more serious than we thought, and the weeks turned to months, we finally decided to make the shift to Rochester a permanent one,” Jenny told Inman. “We contemplated for the first couple of months, but realized it just doesn’t feel safe for us to go back to New York City … We had planned to move outside of the city next year, and possibly continue to grow our family, but we did not necessarily plan to move back to Rochester. Now that we have been here with our families, we just can’t imagine leaving them again.”

The four adults and one toddler have all been living in a three-bedroom, two-bath ranch together since March, and Jenny said they’re planning a move into their own place sometime in the fall. For now, though, she said it’s felt relatively comfortable.

“It has actually felt OK, especially compared to our one-bedroom apartment in Queens,” she said.

Tracy Zarola, a Realtor at Lewith & Freeman Real Estate in Kingston, Pennsylvania, said two of her clients came back to their hometowns from larger cities in order to shelter-in-place, and subsequently decided not to move back.

“I have several clients who grew up in the area and after college moved to New York City, Philadelphia, New Jersey and even California for their careers,” Zarola told Inman. “As working remotely became a reality, they started considering moving back home to be near family. Two families in particular came home for quarantine and have decided to stay to be closer to their support systems.”

Although Zillow’s study noted that the majority of those adults who moved back home during March and April 2020 (about 2.2 million out of 2.7 million) are members of Generation Z (18- to 25-years-old), the cases of Jenny and Zemnick show that the trend is also relevant for older generations.

Such trends will undoubtedly make a mark on the rental market at least short-term, with younger generations in particular making up a significant portion of this market. Just among 18- to 25-year-olds, the approximately 12 percent drop in how many of these individuals live on their own translates into about $726 million per month exiting the rental market, according to Zillow. That figure makes up about 1.4 percent of the total rental market in the U.S.

In a few months’ to a year’s time, however, the question may be what impact those individuals have upon re-entering the market, and if they choose to do so.