Since 1971, Women’s Equality Day has been celebrated annually on August 26. The celebration falls on the anniversary of the ratification of the 19th Amendment which granted women the right to vote. 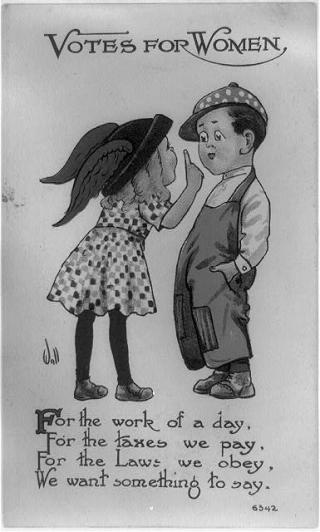 The Woman Suffrage Amendment was first introduced on January 10, 1878. It was resubmitted numerous times until it was finally approved by both the House and Senate in June 1919. The bill needed to be approved by two-thirds of the states, so suffragists spent the next year lobbying state legislatures to gain support for the bill. On August 24, 1920, Tennessee became 36th and final state to ratify the amendment, which passed by only one vote. That one vote belonged to Harry Burn, who heeded the words of his mother when she urged him to vote for suffrage. Secretary of State Bainbridge Colby signed the amendment into law on August 26, 1920.

Fifty years later on August 26th, 1970, Betty Friedan and the National Organization for Women organized a nationwide Women’s Strike for Equality. Women across the political spectrum joined together to demand equal opportunities in employment and education, as well as 24-hour childcare centers. This was the largest protest for gender equality in United States history. There were demonstrations and rallies in more than 90 major cities and small towns across the country and over 100,000 women participated, including 50,000 who marched down Fifth Avenue in New York City.

In addition to the marches, groups of women participated in publicity stunts aimed at garnering more recognition of gender inequality. Women in New York City took over the Statue of Liberty, hanging two 40 foot banners from the crown reading “March on August 26 for Equality” and “Women of the World Unite.” An organized group stopped the ticker tape at the American Stock Exchange, and held signs such as, “We won’t bear any more bull.” Female teachers also filed a lawsuit against the New York City Board of Education in which they demanded gender equality in appointing educational administration positions. The case lasted about 10 years and finally resulted in an increase in female principals.

While the strike did not halt the activities of the nation, it drew national attention to the Women’s Movement. The New York Times, for example, published their first major article on the Feminist Movement by covering the events of the day. It even included a map of the route the marchers took through the city.

In 1971, Representative Bella Abzug (D-NY) introduced a successful bill designating August 26th of each year as Women’s Equality Day. Part of the bill reads that Women’s Equality Day is a symbol of women’s continued fight for equal rights and that the United States commends and supports them. It decreed that the President is authorized and requested to issue a proclamation annually in commemoration of woman suffrage and the 1970 Strike for Equality. Women today continue to draw on the history of these brave and determined women.